I had to share this article that My friend Tammy Davis had posted on her Facebook page…I love the article written by Karen Salmansohn and I love Aristotle what an amazing human being. Last night I watched a documentary on him and he was such a well rounded person. Humble as well. Enjoy this great article! 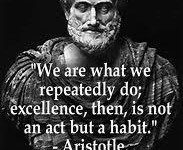 There are 3 Kinds of Relationships + Only 1 Brings True Happiness When I was a teen, I tried to read the entireEncyclopedia Britannica.

My goal: Memorize its contents, be on TV game shows, win cash and prizes, run away from home, move to Manhattan and become a professional writer.

I got as far as Asparagus.

To this day, I know a little about a lot of words beginning with “A.” Some favorites: ants, atoms, alchemy. Plus,Aristotle was a childhood crush, because I’ve always loved philosophy. When I finished reading his one-page encyclopedic write-up, I bought books about him. I’d been saving these dog-eared, underlined Aristotle books, as well as the “A” book of Britannica, all to be used in a novel, where I’d been planning to bless my protagonist with the quirky detail of knowing all things “A.”

A few years ago I rediscovered these Aristotle books when moving apartments. I flipped through and was surprised to discover Aristotle said a lot of the same things about love and happiness as modern psychologists. Only Aristotle obviously said it first, having been born in 300-ish B.C. Plus, Aristotle said it truly wisely.

Indeed, much of what Aristotle said hit home big-time — in particular about a sexy, smart, funny, rich, lying, cheating, don’t-get-me-started Prince Harming I’d just broken up with. I could almost hear what Aristotle might say to me if we were to chat over souvlaki.

“Mea bene, Karen,” Aristotle would say. “You know what your problem was with your ex? He was not your soul mate — but your ‘sold’ mate — because you sold your soul to be with him. Sure he was sexy, smart, rich, funny — but alas, he was a lying, cheating asshole.”

“What? Asshole?” Aristotle would say with a smile. “Hey, I’m from Greece, so alas I’m no prude.”

“Actually, I meant ‘soul mate’!” I’d correct. “You’re an intellectual guy—the regaled philosopher who was called The Mind of The Academy by Plato. I’m surprised you believe in something as namby-pamby metaphysical as a soul mate!”

“Absolutely!” My fave Greek philosopher buddy Ari would respond emphatically. “Actually, I sort of coined the concept of ‘soul mate.’ If there’d been a little TM trademark thingy back in the 300s B.C., I’d be a very rich man today. I firmly believe caretaking the soul is incredibly important for happiness. I describe a soul mate as a‘soul-nurturing mate.’ Someone who nurtures your soul, thereby promoting insight and growth. I pushed folks to find soul mates because, in my opinion, real happiness only comes when you stimulate your core self — and grow into your highest potential. Basically, the soul is the ultimate G-spot for happiness.”

Of course, I’m playfully paraphrasing for my philosopher buddy. But if Aristotle were here, I know he’d agree with my verbal modernization of his philosophies. Plus, Ari would go on to describe how he views the world as offering three kinds of relationships, only one of which brings true happiness.

Yes, according to my ancient philosopher buddy Aristotle, there are three kinds of relationships – and only one will bring you true happiness.

Partners who are about sex, drugs and rock ‘n’ roll. You share soulless, passionate sex and playful banter — but they’re about the body or ego. They never soul-nurture you with insight and growth, so they never bring real-deal happiness. Basically, instead of finding a soul mate, you’re simply finding a sex-mate and/or an ego-mate.

Partners you spend time with in hopes of garnering status, power, money and beauty like the rich guy with a trophy girl. Again, this is about body or ego and doesn’t bring true joy. Again, instead of finding a soul mate, you’re finding a sex-mate, ego-mate, status-mate, and/or wallet-mate – none of which are long term satisfying mates!

Partners who challenge and inspire you to grow into your highest potential and nurture your soul. A good example is when Jack Nicholson’s character in “As Good As It Gets” says, “You make me want to be a better man.” When you prioritize seeking a partner who supports you becoming your best self — instead of crushing on “superficial lures”(hotness, funniness, smartness, success, etc.) — you wind up with a soul mate/a Prince Charming/a definite keeper!

With this in mind, if you want to be happy in love, you must take time to see past your partner’s “superficial lures”  (hotness, funniness, smartness, success, etc.) and look inside to get to know their “core self” – or their “true soul.”

Unfortunately, as I’d discovered with my ex, those fumes of chemistry can sometimes dizzy a gal into making stupid love choices.

Yes, if you want to be happy, you must seek a good-hearted, ethical soul who brings you great growth — not simply a hottie who brings great grope. I’m joking. But I’m serious.Which brings me to another point – a confession.

Confession time: Another superficially alluring quality I’ve been suckered in by is humor. I am Silly Puttyin a friggin’ funny man’s hands. I once had a boyfriend who teased me that the secret to getting me into bed was to crack five good jokes in a night. He’d count down his jokes as the night progressed. Unfortunately, funniness is a mere decorative quality — sometimes developed to avoid talking about real-life issues. Which is why in the past, after a few months of dating a friggin’ funny guy, I’ve witnessed all that fabulous ha-ha-ha laughter often gives way to tears when the guy’s true character — true soul — shows up as one that avoids honest communication, warm empathy and the desire for growth. Yes, when I’ve tried to connect soul to soul — heart to heart — with a partner who’s been super funny, I’ve often found that I’m greeted by a gigantic, unmovable whoopee cushion wall.

Basically, friggin’ funny is only the tiniest tip of a person. Meanwhile, a person’s soul is a person’s foundation!

For the record: Aristotle wasn’t against finding someone friggin’ funny or friggin’ sexy or friggin’ rich. He believed these pleasure-bringing qualities were good for stirring up passion, which humans need to be our fullest selves! But Aristotle recognized “superficial lures” and material goods were simply what he called “means to the ends” of happiness, not “the final ends,” which is always to grow into your most esteemed self.

As Aristotle said: “Men imagine the causes of happiness lie in external goods. That is as if they were to ascribe fine and beautiful lyre playing to the quality of the instrument rather than the skill of the player.”

Basically, it doesn’t matter how rich a guy is if his behavior makes you twitchy and miserable.

While on the subject of money, Aristotle was no fan of slackers either. He recognized that being or dating poor brought its share of problems. He even admitted the lack of a certain amount of wealth was as much an obstacle to happiness as deprivation of freedom. He gladly accepted that some wealth was needed to be happy — just as exciting bodily pleasures were needed.

But again, wealth and bodily pleasures were mere means to the ends of happiness — these ultimate ends being to nourish your soul, so you can reach your most esteemed level of self.

A big secret to happiness?

As you get to know your partner, look to see if they:

2. Have developed good character — so they’ll be a positive influence on your character development.

If your partner scores two for two, you’re likely in Prince/Princess Charming territory.