Pastor Jeremiah Steepek transformed himself into a homeless person and went to the 10,000 member church that he was to be introduced as the head pastor at that morning. He walked around his soon to be church for 30 minutes while it was filling with people for service….only 3 people out of the 7-10,000 people said hello to him. He asked people for change to buy food….NO ONE in the church gave him change. He went into the sanctuary to sit down in the front of the church and was asked by the ushers if he would please sit n the back. He greeted people to be greeted back with stares and dirty looks, with people looking down on him and judging him. 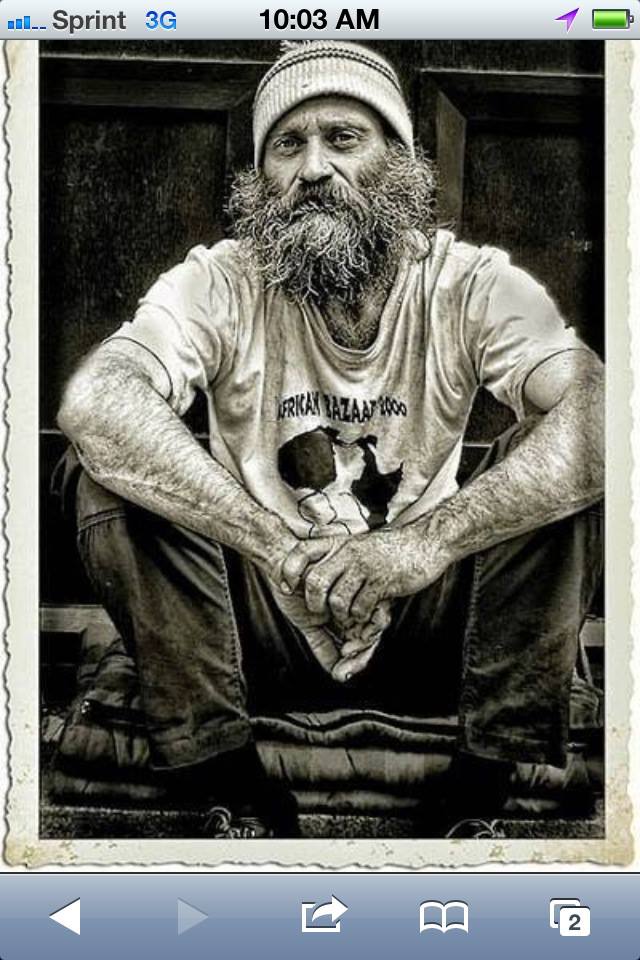 As he sat in the back of the church, he listened to the church announcements and such. When all that was done, the elders went up and were excited to introduce the new pastor of the church to the congregation……..”We would like to introduce to you Pastor Jeremiah Steepek”….The congregation looked around clapping with joy and anticipation…..The homeless man sitting in the back stood up…..and started walking down the aisle…..the clapping stopped with ALL eyes on him….he walked up the altar and took the microphone from the elders (who were in on this) and paused for a moment….then he recited

“Then the King will say to those on his right, ‘Come, you who are blessed by my Father; take your inheritance, the kingdom prepared for you since the creation of the world. For I was hungry and you gave me something to eat, I was thirsty and you gave me something to drink, I was a stranger and you invited me in, I needed clothes and you clothed me, I was sick and you looked after me, I was in prison and you came to visit me.’ “Then the righteous will answer him, ‘Lord, when did we see you hungry and feed you, or thirsty and give you something to drink? When did we see you a stranger and invite you in, or needing clothes and clothe you? When did we see you sick or in prison and go to visit you?’

“The King will reply, ‘Truly I tell you, whatever you did for one of the least of these brothers and sisters of mine, you did for me.’

After he recited this, he looked towards the congregation and told them all what he had experienced that morning…many began to cry and many heads were bowed in shame…. he then said….Today I see a gathering of people……not a church of Jesus Christ. The world has enough people, but not enough disciples…when will YOU decide to become disciples? He then dismissed service until next week.

This is apparently a false story above but I love it and I want to believe it so I put it on my blog because like thousands of other people around the world they love it too. The question is why do we love it? Why do I love a story about a man going through the fire and coming out the other side. A mirror, I see the church as a micro of our communities, here is an institution that is built on community, access and the message of Jesus and then you have people that are asleep. That is why I ask the question to myself. Am I Sheep, A Lion or Both. I can’t say I’m a Christian, a Buddhist, Muslim or an atheist. I have no religion, I was brought up and deeply influenced Catholic but it didn’t stick with me. I’ve tried other religions and philosophies but nothing has stuck to me more than life and being here in the now and being present everyday, every second. For me when I think of Religion I think about the intentions of the concept and I think about the beauty that the disciples chose to write and how to worship. I believe man tries to understand things by controlling them with words and giving them meaning. In fact man plays God. Evolving Humans are bored and don’t know what they’re suppose to do as we have become more tamed, more educated, more sophisticated over thousands and thousands of years we have become a bored society and Men carry their message without really having a message and they use their Church or Religion as a place to escape to and to reason with what is life because in this place they can go on auto pilot and be Sheep with a group like the story above. This is not just a Christian experience this is a human experience for every religion, club, or society. At the end of the day life is a constant decision of who you are and who you want to be and do you either feel safe and loved or are you afraid and feel unloved. To help the homeless man would mean you would have to go outside yourself and you would have to give energy away to someone and that someone would appear to not be able to give you back the same type of energy. Is it wrong to shun the Homeless man? Why, me here in my nice house by the beach. If I was at the church, It would depend if that Homeless Man was present and nice. I would be nice back but if he was super needy and dirty…I would have issues with helping him. Partly because I would probably be with my young children and I wouldn’t trust this guy and I wouldn’t want to get dirty and I don’t trust him. Interesting how a man of my stature and personal faith can be Human, a Judge but this is the case of awareness and circumstance. Life is in the moment and this is the gift and magic of life and it’s something that you can’t really predict or prepare for it is the now moment and this is the truest state of life to be in the present and I think this is the biggest question and that is are we present? Are we present with life.

Please excuse me for my typos and run on sentences 🙂 This is post is meet to question, ponder and create self awareness.