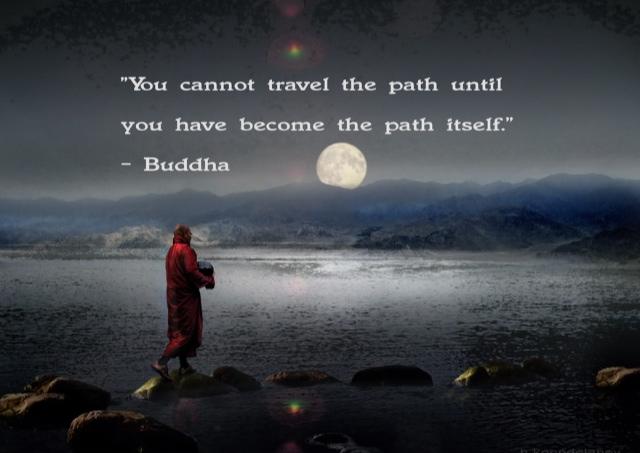 “You cannot travel the path until you have become the path itself.”

I’ve been looking at this for a few day’s. I pull pictures and I keep them around me and I see how they trigger and inspire me. Recently, I had a conversation with a friend of mine who’s a super Rad Human and creative genius. His name is Jon Theodore and he’s a craftsman and a wizard by trade and he said a very poignant thing to me on the phone. He said, “Tony, I Play Drums & I’m Good At” (Queens Of The Stone Age Drummer) pretty simple right but what we where talking about was consistency, follow through…we where talking about the PATH. I live in Los Angeles and a lot of people who come to Hollywood that are actors and musicians are really talented but what happens when they get here is that they get of track. “They Stop Playing”  They stop becoming the PATH and they don’t follow their radness.

What if we changed what Buddha said and said this ” You cannot Be The Life until you Become The Life itself” ..Well, how do you become the life..the path…Well, I’m searching this answer myself and from my experience it’s an active consistent decision and follow through on your craft/purpose.

My Sister’s boyfriend of the last 22 years has been an artist/painter.

20 plus years ago he was super talented. He lived his art, lived in San Francisco did the art thing. 10 years go by…got his master in art from a college in los angeles..working in a museum..trudging doing his art…sufferering and I would say hitting a point of I hate what I’m doing…then something happened and it’s ground breaking in an artist life I believe. The craft…The kick…The Bruce Lee quote “I Fear The Man Who Has Practiced ONE KICK 10,000 TIMES.” Like my friend Jon Theodore my Sister’s partner and my dear friend and super Rad Uncle to my kids, David Allan Peters became the path of his destiny…he dropped in and he mastered his craft and he had to go through the fire to hone his “Kick”, his “Drum”, his “Art”

You see I asked, David the same question what’s been your key and he said the same thing that Jon said. “I Paint”, and he kept painting…he didn’t give up and from my perspective of knowing him closely there where some super hard times on purpose and is this my life. Is this my journey and he still painted….and he has become what he wanted to become an ARTIST at the highest level with an untapped ceiling.  The same goes with Jon untapped ceiling. These examples are of the artist nature but to me they are crafts that apply to any passion or gift that we choose. Bruce Lee being a martial artist, Buddha being an enlightened human being on the quest for complete understanding of self both are crafts that had to be tuned and practiced over and over to get to the place of brilliance and in these steps the joy has to be the spark has to be in that process to maximize the “Kick” 10,000 times!!!

You Cannot Travel The Path Until YOU BECOME THE………….(LIFE) (CRAFT)

FOLLOW YOUR RADNESS + RAD, WASN’T BUILT IN A DAY =